A spatial composition for an ensemble of kinetic sound machines.

Murmur consisted of nine automatically controlled rotating sirens similar in design to those used in Siren. As the machines activated electronic sound stores emitted electronic sounds. The installation was programmed on a ten minute sequence and activated by the presence of the audience. Housed in the dark basement of an uncompleted nightclub development in Liverpool, the audience stood on a mezzanine floor and looked down into a large and tall basement area were the tripods were located. The automation also controlled the lighting in the space enabling the lights to be extinguished during the sequence.

The automation was achieved using a Mitsubishi Alpha Micro Controller which switched nine relays enabling individual tripods and lights to be programmed and controlled independently. The sound stores were charged via slip rings so that no batteries required changing over the ten week run of the installation.

The sound world for Murmur was derived from the sound world of Swarm.The automated sequence enabled individual tripods to be activated and controlled in the way an instrument would be used in a conventional composition. 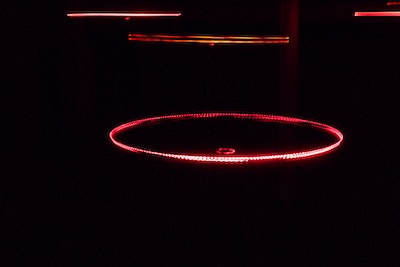