Ray Lee is an award-winning sound artist, and composer. He creates spinning, whirling, and pendulous sound installations and performances that explore “circles of ether,” the invisible forces that surround us.

His immersive and mesmerising works such as the world-wide hit Siren, Ethometric Museum and his monumental outdoor works Chorus and Ring Out are a unique synthesis of art forms, both accessible and engaging for a wide audience.

His new outdoor work Congregation, for one hundred interactive sonic spheres, was funded by Without Walls and toured throughout the UK in 2019. His music-theatre work Ethometric Museum won him the 2012 British Composer of the Year for Sonic Art. Siren toured the world with significant British Council support. Force Field was awarded an honorary mention in the 2008 Prix Ars Electronica. He is a Professor of Sound Art at Oxford Brookes University and an associate artist of OCM (Oxford Contemporary Music).

Congregation is coming to Oxford on the 8th and 9th October! Let a sonic sphere guide you through the streets of Oxford to a secret destination: https://www.ocmevents.org/whats-on/congregation 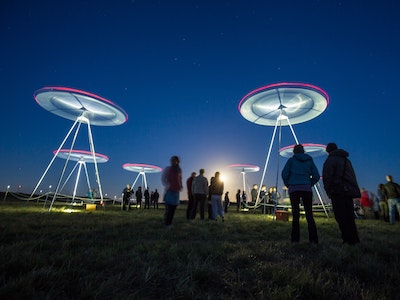 Towering above the audience a series of giant metal tripods support rotating arms. 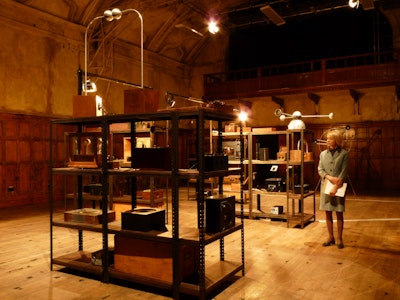 Appearing to be artefacts from a hitherto unknown branch of science, Ethometric Instruments are curious, fascinating relics from a bygone age.

A series of giant towers hold suspended bell-like speaker cones. A team of 'bell-ringers' make the cones swing higher and higher until each arm soars up over the heads of the audience ringing forth with a peel of electronic tones.

Siren is a spectacular performance piece that takes place within an installation of large sound sculptures; metal tripods with rotating arms that emit electronic drones.